One day really soon I will try to go back to funny occasionally with my blog instead of just whinging.

Well it’s not all doom and gloom but I also think we have had our years worth of crap already and today is only the 2nd of February. For anyone who wants to know how great my 2018 ended then please have a read of my previous blog HAVING A SOOK! As a result though, I got to see a different side of my bosses. I hope they don’t mind me sharing this and if they do future readers won’t see it as I will delete out of respect.

But, as I usually do, backstory time.

I started working with this company in January 2018. January 2018 was also the first month of Hayley getting zero treatment as she was now in Complete Remission. Even though treatment was done, we were aware that there will be scans every 3 months to ensure that she was still in Complete Remission. We also knew that she was started the year with a very low immune system and very much underweight. They were 2 things that we were well aware would improve. We also knew that the successful scans would mean that the port will be removed. The blog on that was called HAYLEY’S PORT IS GONE! Feel free to have a read.

So, with multiple scans, follow up appointments, dentists to check how her teeth were going after radiation, several hours in emergency when she got a fever, vaccination update and port removal, all my sick leave was gone. I was unwell for a day or two myself during the year too. So most of my annual leave was gone too.

Then in November my back went out. I ended up having 3 weeks out of 5 off. Again, I had been with the company less than a year and it was a week before Christmas. These two guys don’t believe in leaving anyone in the shit at that time of year. So my pay didn’t miss a cent and my annual leave went into a negative. I’m only a couple of weeks off catching that up again. I know that I have worked places that didn’t care anywhere near that much and would have just done time off without pay. In all honesty, that would have been fair enough. You shouldn’t pay someone not to work. So thank you guys.

Then, New Years Eve! Between the painkillers and 2 or 3 beers, I went for a little lie down about 8:30pm and I was snoring loudly by 10pm. My wife, a little bored by my party animal antics, only had one glass of wine. I mention and highlight just one glass because the next day has no explanation. Maybe gastro, maybe food poisoning. Don’t know if the extreme dehydration or what but when you hear a thud come from the bathroom and no answer when you ask are you okay. As I entered the bathroom my wife was starting to come to again and little lost and confused as to why she was on the floor. A small bump on her head thanks to the tiled floor as well. She never left the bed that day except for multiple toilet visits. Couldn’t get to the doctors on that public holiday but found the local, bulk billing, home visiting doctor and made an appointment. The answering machine said it might take up to 3 hours for him to get to us. Several electrolyte drinks and icy-poles later arrived. Ended up being closer to 7 hours later. But yes, confirmed either gastro or food poisoning with a possible concussion. I had worked all that out without the years of training, I am grateful for the prescription he wrote for her though. Now to find a late night chemist on a public holiday. Sigh!

My amazing wife Leia has started a dog sitting and walking dogs. One day, a dog she had been walking for a week and a half, out of the blue, bit her on the leg. Luckily not a full attack. Just bite and let go. I don’t mean just but you know what I’m saying. Nearly 3 weeks later and 2 of the teeth punctures are still open, weeping wounds and we still need to saline wash and redress the area every day. For 2 days I was basically crutch. Another 2 days in bed, only getting up to be helped to the toilet.

Nearly 2 weeks ago at work. In the big CARDBOARD ONLY dumpster I saw that a caring passerby thought that was a great spot to dump his empty bottles. Knowing they weren’t made of cardboard, I decide to get them out. The bin hadn’t long been emptied so they were a long way down. I had to jump and balance on my stomach and lean down to grab the bottles. As I slid off felt the edge of the bin catch on my ribs. Ow! I thought to myself. A bit of a bruise appeared lower on my stomach a day or two later. By my rib had a bit of a nagging pain. A week later I couldn’t sleep for the pain. Today I finally took myself to the doctor and guess what. A broken rib. Yep, a slow healing, nothing can be done to help, Hayley’s head height, broken bloody rib.

We did go out on a date, just the 2 of us, kid free for a day. A beautiful High Tea on a paddle steamer called The Kookaburra Queen. The waitress found out that in February Leia and I will celebrate being married 20 years and so she grabbed my phone and took lots of photos.

They then grabbed my photo from Facebook or Instagram and used it to advertise their Valentines Day cruise, hahaha. 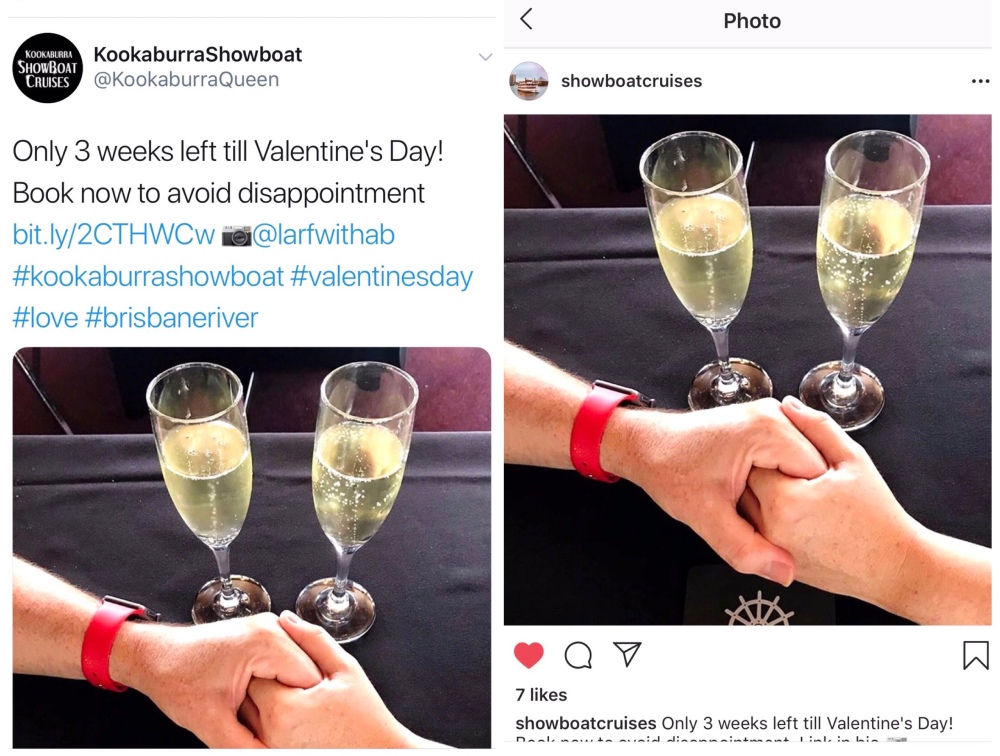 So that’s our start. I can’t do the physiotherapy exercises to help my back because I have a broken rib. So my back has slowed down on improving. Leia is still limping a bit. 2019 hasn’t started well so we are open to improvement. 13th February 2019 will mark our 20 year anniversary of marriage. So overall I would have to say it’s going to be a great year.

Make sure to click on any links above and if they take you to a Facebook, Twitter, Instagram or IMDb Page, including MINE, then please click LIKE. Also hit on the Subscribe button to be kept up to date with what is going on in my little world, it’s to the right of your screen on a computer and down below if you’re on a mobile device. Thank you.

Love to all, chat soon

The Alternative Guide To Learning and Fatherhood

Sally McLean: Actor. Writer. With a bit of a thing for Shakespeare.

Dad who is having a try at Actor, Writer, Director, Producer, Comedian