Okay, this blog is me having a whinge about a few things. So trigger warnings. If you don’t want to hear about pain, constant pain, painkillers, addiction, depression, debt and a few other cheery subjects then change the channel now.

Over 28 years ago I started working in the paint industry. About 20 years ago they started to no longer make 20 litre drums of paint and started replacing with 15 litres. A process that took a few years to take over. Before that I helped dad with his second hand furniture business. So basically 35 years (give or take) of lifting, moving, delivering, etc of some very heavy items.

This has taken its toll on my back. A few little incidents here and there over the years has caused my back to seize up painfully. This usually comes good again after a few days or the worst times, a couple of weeks. But as I’ve got older, the healing has got slower. Recently, I woke up one Saturday morning with a sore back, for no known reason. By the Monday it had fully seized up. I took the week off work. I returned to work the following week even though I was still in some pain. Over the 2 weeks at work it progressively got worse until my boss told me to take another week off. That starts today.

The doctors have given me some strong pain killers that did seem to have an effect. They also affected my head. After sitting on the couch a bit too long I stood up. Not sure if it was the pain or the painkillers but my legs went wobbly and I went headfirst into the corner of the wall. 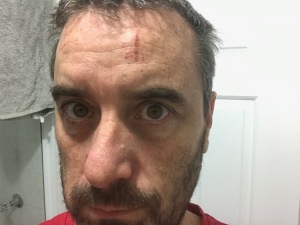 I started to have a better understanding of what my father went through years ago. He had an accident at work which wrecked his back. He was on strong painkillers until they didn’t work, then went stronger, then stronger and then became addicted to pethidine. He eventually got himself into rehab. After that, in summary, remarried, moved away and wanted nothing to do with us. Even when his 6yo granddaughter, Hayley, was in hospital fighting cancer and all she kept asking for was to meet him and he didn’t give a shit. She still hasn’t met him.

Anyway, back to my point. I understand being addicted to not hurting. But I also don’t want to go down that path. To add insult to injury, not only do I look like my useless father, I have also caught myself recently doing the chicken walk he used to do when his back was playing up. I quickly try my best to straighten up straight away. And in case my brother Dave is having a laugh about me comparing myself to our father, remember that you look like him too so I precede your next comment with a “GET F@#$ED!!” LOL!

I’ve got to tell you that this feeling of uselessness does wonders to strengthen the depression. Although, when I mentioned to someone that I am related to once that I had been diagnosed with depression they replied with “You don’t have depression. I have depression.” I have also been told by someone when I mentioned my back was sore that I don’t know what back pain is. Neither person knew anything about what I was going through. Now I’m not saying that my pain or depression is better, worse, the same or even slightly to the left of what these guys are going through. I don’t know. But if I have my toe cut off am I not allowed to say my toe has been cut off in case someone has lost a foot or had 2 toes removed. I think that I am allowed to say I have a sore back and that I do know what back pain is regardless of what anyone else has gone through. Then I listened to the guys story and yes, his pain is worse, trust me. But no one has the right to tell someone they know nothing on the assumption or even full knowledge they know more.

I know my days selling paint are numbered. A back like this can’t keep doing stuff like that. My boss approached me recently and asked if there is anything we need to talk about with my back, I pretty much said, “Nuh!” and went back to work. Because I know that the conversation that is coming is the one of “If you can’t do the job then you can’t do the job.” With my current financial situation, that scares the shit out of me.

After many years of “Chasing the dream”, “Following my passion.”, etc, etc, other cliches. Just trying to be an actor and comedian, I have set my family up in quite a debt. But then, we were getting on top of it, my wife Leia and I were both working and moving forward. Then Hayley was diagnosed with cancer. Leia lost her job (because of an unsympathetic, piece of shit, non superannuation paying boss) to look after Hayley. If not for the generosity, love and donations from so many, we would have been screwed. But financially, still went back a bit. Then when Hayley went into remission we moved interstate. Which cost a little bit more than expected. 2 weeks after we got here we won $2,000 in the lotto. 2 days after that the washing machine died. We just paid a fortune to have it moved as well. With a family of 5 you can’t get any old, little cheap washing machine either. Especially with the extra bathers and towels with where we live now.

Some wonderful people are sending several great ideas on the best ways to fix my back but at the moment it is that or food. If I lose my job, there is no catching up on the debts. Something that is slowly happening at the moment. When word got to superiors at work about my finances the feedback was that maybe I should be trying harder to keep my job then. Currently I am not feeling like I am in much of a place of empowerment.

A couple of times this year I have sought help for my depression. It’s not easy to ask like everyone keeps advertising. Just ask, speak up, tell someone. Replies, I’m busy at the moment, go see an expert, you need to see someone. When I got a mental health plan referral from my GP it took 5 phone calls over more than 2 weeks before I was given an appointment in January. That last phone call was nearly 4 weeks ago. Luckily I am not suicidal or the help wouldn’t be there. Let me just say that I DO want to live. Sometimes I just don’t know why.

I am hoping this outpouring will bring me some therapeutic release as apposed to just having a whinge. Either way, I hadn’t written anything in a while and here is why.

Make sure to click on any links above and if they take you to a Facebook, Twitter, Instagram or IMDb Page, including MINE, then please click LIKE. Also hit on the Subscribe button to be kept up to date with what is going on in my little world, it’s to the right of your screen on a computer and down below if you’re on a mobile device. Thank you.

Love to all, chat soon

5 thoughts on “Having A Sook!”

The Alternative Guide To Learning and Fatherhood

Dad who is having a try at Actor, Writer, Director, Producer, Comedian